The world of captured lights

Richard’s passion for photography was sparked at the age of nine when his mother gave him an old Box Brownie dating from the 1920s.  With this humble camera he began to explore the science and art of photography.  During his school years he continued to be deeply involved in photography, learning and expanding his capabilities.

On leaving school Richard studied photographic arts at the famous Regent Street Polytechnic College in London where he became recognised for his strong creative vision which was exemplified in his black and white urban landscapes and his photojournalistic approach to portraiture.  The lessons of theory and history, learned at Regent Street as well as the practical experiences have remained with him to this day.

Richard then took up a career in advertising and marketing – working for some of the world’s largest advertising agencies around the world.  But during this time his involvement in photography was never far away, working as photographic director on some major advertising shoots for a wide range of clients.  And he continued to study the work of leading photographers of the time such as Patrick Lichfield, David Bailey, Lord Snowden, Barry Jell, Martin Chaffer and others.

Throughout these years he continued to photograph with film for personal, non- professional use … using 35 mm and 120 cameras … although his output was limited to just a few folios.

The result is that today he has produced a new and exciting collection of truly creative and artistic images, covering a wide range of subject matter from rural and urban landscapes to macro photography of nature, stunning Australian skies and water and a number of other exciting folios.  It doesn’t matter what technology Richard uses, he is always a firm believer it is the creative vision of the photographer that produces great photographs, not the technology that’s available.

Over the years Richard has never disposed of a single camera he has owned and worked with, and has also acquired some other vintage cameras along the way.  He now owns a collection dating from an 1892 Bosco Klapp large format camera to some of the latest digital single lens reflex cameras.  He also has a collection of books on photography that date back to the 1940s.

Today he is best known for his strong visually creative work that has a unique point of difference.  Richard’s approach to photography is very much based on what he learned in his college days, so much of his post capture work is a replication of what he was able to achieve in the old days of the dark room, using emulsion and chemical.

For Richard his work comes from his heart and mind, not from the equipment he uses … that simply enables him to make his creative vision a reality. 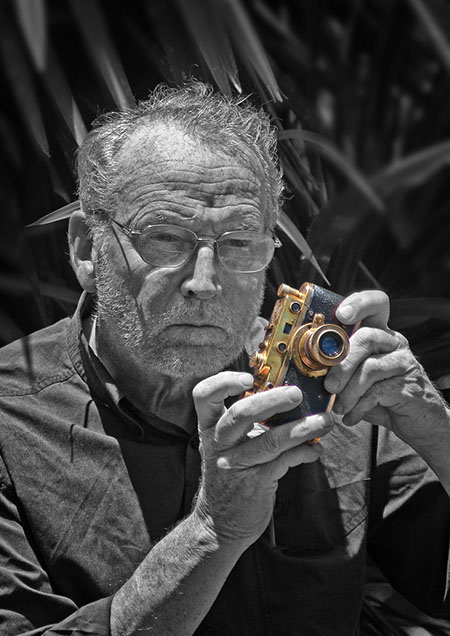 Many photographic enthusiasts often ask Richard what equipment he uses, and go on to say when they're asked other professional photographers the same question, they not too keen to share an insight into what they have in their bag.

So to have a peak inside Richard's camera bag ...